Tam Thanh Mural Village is a quite new destination for both national and international tourists. However, it’s a well worth site to visit owing to many murals painted by a dozen artists from Korean and Vietnamese. Those paintings display vivid Vietnamese family, nature, culture even portrait of Vietnamese people and so on.

Depart from meeting point we head to Hoi An city to join in a group then together we travel to Tam Ky city across Cua Dai bridge. With the length approximate 1400m, Cua Dai bridge is an important construction to carry the banner for the future development of the district. Along this road, you have chance to discover dazzling, remote, largely unpopulated beaches, punctuated with occasional fishing communities, and mile after mile of scenic rural farms and villages.

You will have 30 ~ 45 minutes stop to visit Vietnamese Heroic Mother Statue. The statue resembles “Heroic Mother” Nguyen Thi Thu, who was from Dien Thang Commune, Dien Ban District, in the province and whose 11 children and grandchildren all died in Vietnam’s liberation fight.

After that, we will head to Tam Thanh Mural Village. A large group of volunteers from the Korean, following the project “Art for better community”, turned their artistic talents into transforming the Tam Thanh fishing village in Quang Nam into the first mural village of Vietnam. Then, we will return to Hoi An and take a shuttle service back to Da Nang city.

Transfer and transportation as per itinerary 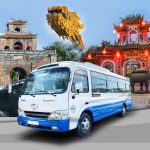